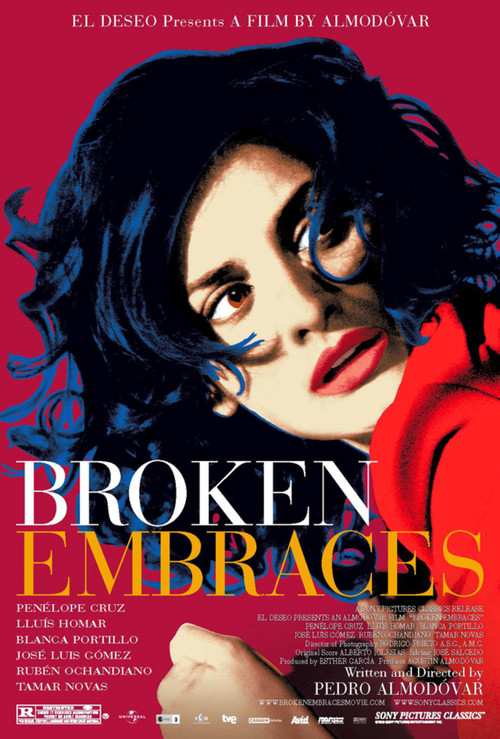 Blind screenwriter and onetime film director Mateo (Homar), who writes under the pen name Harry Caine, feels that he lives life as an epilogue, having experienced almost everything. But he remembers a time, before he lost his sight in an auto accident, when he passionately courted and won over his leading lady, Lena (Cruz). Recalling the ill-fated shoot 14 years before, he recounts to his assistant Judit (Portillo) how Lena's jealous lover Ernesto (Gomez), now deceased, strong-armed his gay son Ray (Ochandiano) into spying on her under the guise of making a documentary about their collaboration.

Almodovar's "Broken Embraces," an elaborately structured roundelay of flashbacks and proliferating storylines, is a heady romantic melodrama that's as much about the dark magic of moviemaking as it is about passion and revenge. Hitchcock and Douglas Sirk both come to mind as influences on Almodovar's noirish love-gone-wrong tale, but the gorgeous cinematography, frenetic time shifts, and charmingly bold set designs are all Pedro. Impressive as ever, Cruz is a fiery and delectable presence in whatever persona she assumes (a Spanish Marilyn Monroe, in one sequence). Ultimately a pastiche of film history gussied up as a sultry thriller, "Broken Embraces" is a stately, thoroughly tempting affair.