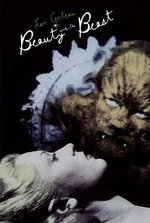 Beauty And The Beast

An old merchant finds himself lost in the woods, and knocks at the door of an enchanted castle. Later he picks a rose from the castle garden, which calls forth the owner, a terrifying half-man, half-beast (Marais), who proclaims that for plucking the rose, he must either become his prisoner or send someone back in his place. Returning home, the man tells his family of his misfortune, and his beloved youngest daughter Belle (Day) insists on going back to the castle. Once there, her initial fear and loneliness gradually recede as she discovers the Beast is not precisely what he seems.

The premise of this French fairy tale will be familiar to anyone who's seen the wildly successful and (on its own terms) worthy Disney feature, but this original film version by director Cocteau is, appropriately for grown-ups, a more subtle, bewitching and artful rendering of the story. Magic, menace, fantasy and wonder are created through makeup, lighting, and sheer ingenuity of conception. The result is a work of genius, a stunning and surreal masterpiece sure to captivate the child in us all.

Beauty and the Beast