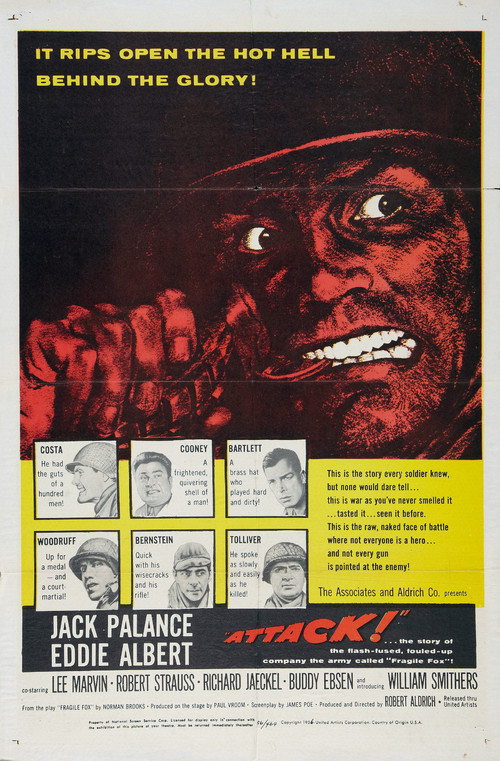 Ordering his men to attack a well-guarded German pillbox, Lieutenant Joe Costa (Palance) expects backup from his senior commander, Captain Cooney (Albert). The captain balks out of fear, and a squadron of Costa's men die as a result. Infuriated, Costa curtly informs Cooney that if it happens again, Cooney will pay for his cowardice with his life. Days later, Cooney dispatches Costa's men to the Belgian front, where the fighting is even fiercer than before.

Offering a hard-as-nails depiction of war and the ugly flipside of frontline bravery, Aldrich's "Attack!" revisits the decisive Battle of the Bulge with a realistic tale of mutinous revenge. The always intense Palance delivers a riveting performance as an aggrieved lieutenant at the end of his rope, but it's Albert, in a superb turn as the scurrilous, yellow-bellied captain, who earns top honors. Great support from Marvin, as Cooney's corrupt, high-ranking pal, Colonel Bartlett, and William Smithers, as a conscientious soldier, round out a fine cast. This gritty, searing war drama ranks with "Kiss Me Deadly" director Aldrich's very best work.