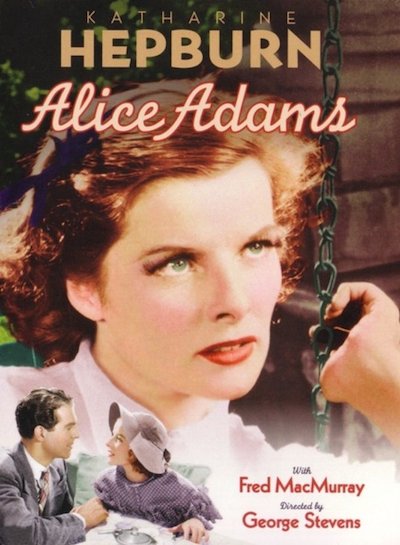 In a small mid-western town, Alice Adams  (Hepburn) lives with her pushy mother (Shoemaker) and ailing father (Stone) in a shabby, run-down house. Taken to a fancy socialite party by her gambling brother (Albertson), Alice meets Arthur (MacMurray), a handsome, well-to-do bachelor. For a while she hides her modest roots and dysfunctional family from him, but finally decides it’s time to invite Arthur to dinner. The family even hires a maid (McDaniel) for the occasion in order to impress him. Will the ruse work, and will Alice get her man?

Adapted from the Pulitzer Prize winning novel by Booth Tarkington, this gentle satire features a mesmerizing Hepburn in the second of her 12 Oscar nominated roles (she won four times). Stevens, who went on to direct Hepburn’s “Woman of the Year”, draws poignancy from the plot and allows Kate to shine playing (against type) an achingly vulnerable character. The happy ending may be a Hollywood invention, but it’s hard not to smile while watching this charmingly old-fashioned, Oscar nominated delight.