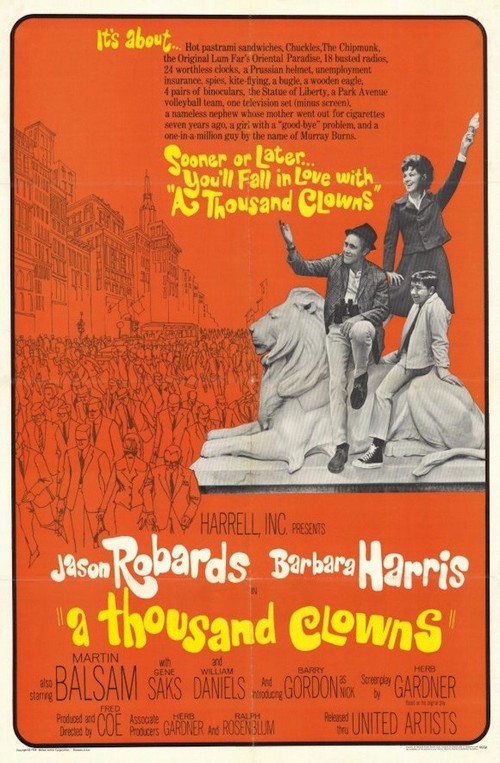 TV writer Murray Burns (Robards), fed up with the soul-crushing repetition of modern working life, decides to bow out and live as a free man. The only problem is that he's not alone: his precocious, gifted 12-year-old nephew, Nick (Gordon), is under his care. When the Child Welfare Board, represented by stiff bureaucrat Albert (Daniels) and the more empathetic Sandra (Harris), tells Murray he'd better find some form of income or Nick will be taken away, Murray is faced with a difficult choice. Will he finally grow up?

Nominated for four Academy Awards, including Best Picture and Screenplay, and winner of a Best Supporting Actor Oscar for Balsam (who's fabulous as Murray's long-suffering older brother): the long-unavailable "Clowns," based on Herb Garner's hit play, should be treasured as the kind of clever, dialogue-based comedy that's almost extinct today. The whole cast is wildly appealing, and there is no better Robards comic performance on film. To his credit, director Coe adds vibrancy — and softens the films stage origins — with kinetic, flavorful shots of mid-'60s Manhattan. There are "A Thousand" reasons to catch up with this small, offbeat, life-affirming gem.

A Time for Burning