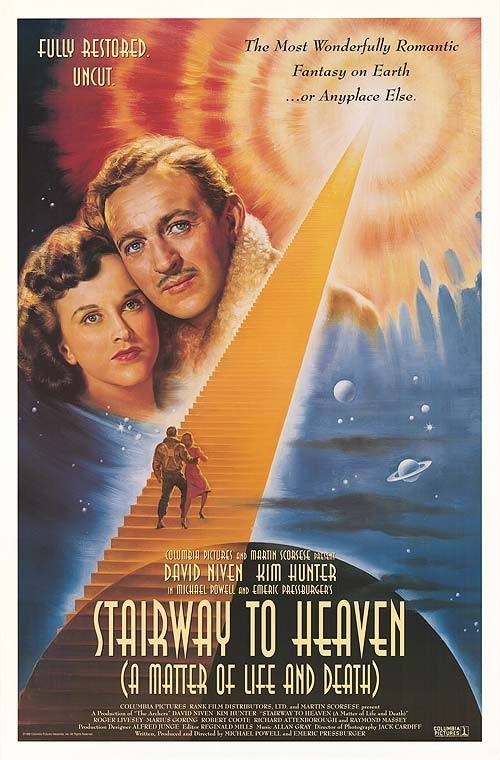 A Matter of Life and Death

World War II British air force pilot Peter Carter (Niven) is without a parachute in a disintegrating plane flying over the English Channel. He desperately radios in his location to American operator June (Hunter), and the two quickly establish an intimate connection in the face of his impending death. However, heaven's bumbling administrators fail to collect Peter at the appointed hour, so instead of being taken to the other side, he finds June and the two fall in love. When the afterlife's authorities track him down, Peter begs them to let him stay on earth with his beloved. The powers that be agree to let him plead his case in a celestial trial which pits the primacy of love against the hand of fate.

"Stairway" is a heartwarming, sublime piece of entertainment, blending supernatural fantasy, gentle satire, a stirring love story, and thoughtful ruminations on the meaning of life. Crafted with loving care by Powell and Pressburger, the movie is gorgeously shot and staged. All the players deliver impeccable performances, with Marius Goring nearly stealing the show as a French dandy who guides Peter in the afterlife. The choice to shoot scenes on earth in Technicolor and those in heaven in black-and-white is just one of the movie's many clever surprises. Getting to see this gem may not be a matter of life and death, but you'll be sorry if you miss it!

A Matter of Taste