When Simon and Garfunkel came out with the song “Mrs. Robinson” on the soundtrack for the coming of age film “The Graduate” (1967), baseball great Joe DiMaggio was angry about the lyric that asks, “Where have you gone, Joe DiMaggio?”

Then one day Simon and Joltin’ Joe met coincidentally at a restaurant where, according to Simon, they “immediately fell into conversation about the only subject we had in common."

To Mr. Depp, I say, we are still searching for heroes. Where have YOU gone, Johnny? We hardly knew ye!

We need actors who aren’t afraid to undertake heartfelt performances, or to embody eccentricity and vulnerability - but in our hour of need I fear you’ve vanished off the edge of the world with a chest of gold doubloons to Davy Jones’ Locker… five fathoms deep.

Of course Depp’s familiar face still appears on most every street corner, but the blunt truth is that lately, he’s been falling flat as a pancake — with critics, and at the box office.

His last several large-scale outings have been a tired row of big budget, cartoonish flops. The most recent, a sci-fi picture called “Transcendence” (2014), looked vaguely promising, but was a bust with audiences and critics (currently earning a paltry 19% at Rotten Tomatoes - if you rely on such sources). Claudia Puig of USA Today writes tellingly: “Ordinarily a gifted actor who fully invests himself in diverse roles, Depp is uncharacteristically listless, as if he realized too late that what he'd signed on to was hardly worth the effort.” Sounds like one to make even Ed Wood say “Pass.” 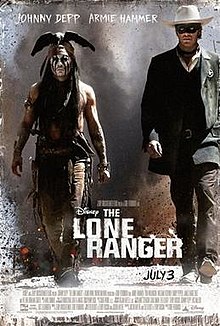 Last year’s stink bomb, “The Lone Ranger” (2013) represented not only a loss of cash, grossing less than $90 million off a $200+ million budget, but was also a loss of face for Depp, whose portrayal of a Native American Tonto was deemed politically incorrect in many circles. Come on Johnny- couldn’t you see that one coming?

And 2012 brought us a labored rehash of yet another long-lost television show - a send-up of the already campy soap opera “Dark Shadows,” in collaboration with director Tim Burton. “Shadows” also failed to see the light of positive returns.

When you really think about it – when WAS his last truly good film? In 2012 he tried to reprise his habitation of a Hunter S. Thompson doppelganger in “The Rum Diary” to a disappointing box office. And who remembers “The Tourist” (2010), a thriller that cost $200 million —$20 million of which was Depp’s fee? Anyone?

Of course, I would be remiss if I didn’t mention his grand success as the castaway lovechild of Keith Richards and Long John Silver: Captain Jack Sparrow. But the role is hardly something to raise your sails for – Cap’n Jack is a part that seems to only require only enough bottles of rum to sing “Yo Ho Ho!”

In plain language, the billion--yes, billion with a “B”-- dollar grossing “Pirates of the Caribbean” movies are a set of films based on animatronics that populate a ride (albeit a fun ride) at an amusement park. Not very strong grog for an actor who used to pride himself on making intelligent, original movies (And shiver me timbers! There is going to be a 5th installment in 2016!).

Sadly, you have to reach pretty far back in Depp’s medicine bag of tricks for something that’s not a caricature of his former, better self. I would say his last flesh-and-blood role was that of J.M. Barrie in “Finding Neverland” (2004) and that was a decade ago – I know, it shocked me too.

And it’s such a shame - As Vulture blogger Kyle Buchanan keenly points out, “Young Johnny Depp would hate the old Johnny Depp.”

Way back when, the younger Depp was doing all he could to dispel his "pretty boy" image, turning down roles like Jack in 1994's “Speed” in order to take on more challenging, edgy parts in “What’s Eating Gilbert Grape” (1993) and “Ed Wood” (1994).

Numerous interviews from the early Depp days decry his contempt for the idea of selling out and the commercialism of Hollywood. So we ask the heavens above, Johnny, what can we do to call you back from the belly of the Kraken?

Depp has some possible winners in the barrel – including (we hope) a surefire hit, playing The Wolf in a film adaptation of Sondheim’s “Into The Woods,” which is set to open on Christmas Day 2014. He’s also currently working on a film where he plays reputed gangster Whitey Bulger; we’ll see how that goes, but judging by 2009’s “Public Enemies”, it’s hard to buy the still boyishly handsome actor as a hardened killer.

There are also rumors that Depp may play Harry Houdini in an upcoming biopic. That sounds intriguing. If it happens, I hope it brings back the old Depp magic.