Why "North by Northwest", Hitchcock's Most Entertaining Film,

In my childhood, one of the movies that made me fall in love with movies was “North by Northwest” (1959).

To my young, dazzled eyes, this film had everything: color, excitement, suspense, romance, humor, handsome scenery and even handsomer stars. It grabbed me from the first moment and never let me go. It was the most thrilling movie I had seen up to that time.

Of course, I didn’t get all the nuances of Ernest Lehman’s brilliant screenplay when I was a kid, but I understood enough to know it was superlative writing and storytelling. Half a century later, of course I appreciate it even more.

Made by MGM and shot in Vistavision, this larger-than-life classic always cried out to be seen on the big screen, but that was never an option for me. Until now. 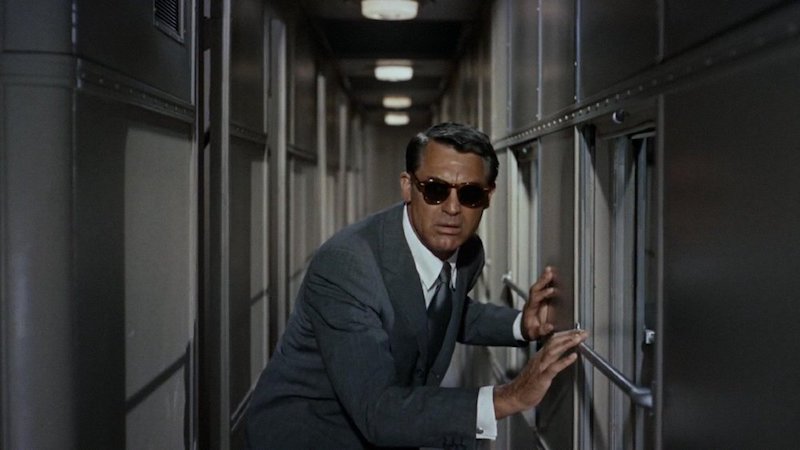 Thanks to the recent restoration of the Bedford Playhouse in Bedford, New York, located about two minutes from me, on Sunday I will finally see “North by Northwest” the way it was meant to be seen. I am positively giddy about it. And this once-in-a-lifetime moment made me want to look back at the making of this bona fide classic.

In 1958, Alfred Hitchcock had just made “Vertigo.” Now considered one of the best movies ever made, it had been a commercial disappointment on release. He then signed on with MGM to direct a screen adaptation of Eric Ambler’s “The Wreck of the Mary Deare,” to star Gary Cooper, with whom Hitchcock had never worked.

His composer Bernard Herrmann had recommended his friend, the talented Ernest Lehman (“Sabrina,” “The King and I,” “Sweet Smell of Success”) to write the script. On meeting, the two men hit it off. After several weeks of working on Ambler’s story, Lehman concluded he couldn’t make it work on film, and decided to pass on the assignment.

But Hitch didn’t let him go. Instead, without telling the studio, they started brainstorming ideas for a different movie. As Lehman put it: “I wanted to write the Hitchcock picture to end all Hitchcock pictures.”

Fortunately Hitch already had a lot of ideas he’d been waiting to use, including a slaying at the U.N, a hair-raising climax on Mount Rushmore and a story he’d heard about a fictitious character being created as a decoy to fool the Nazis during the war. Other indelible set-pieces came later, like the famous crop dusting sequence where our protagonist finds himself running from a swooping plane spewing pesticide and bullets on a bleak, remote Indiana highway.

Hitchcock confided in his frequent star James Stewart about the project, and quickly regretted it as Stewart got increasingly excited about playing the central character of Roger Thornhill, a martini-swilling adman who’s thought to be a spy by the bad guys and an assassin by police. Hitch thought Stewart was wrong for the part, and had only one man in mind: Cary Grant, with whom he’d last worked on 1955’s “To Catch a Thief.” 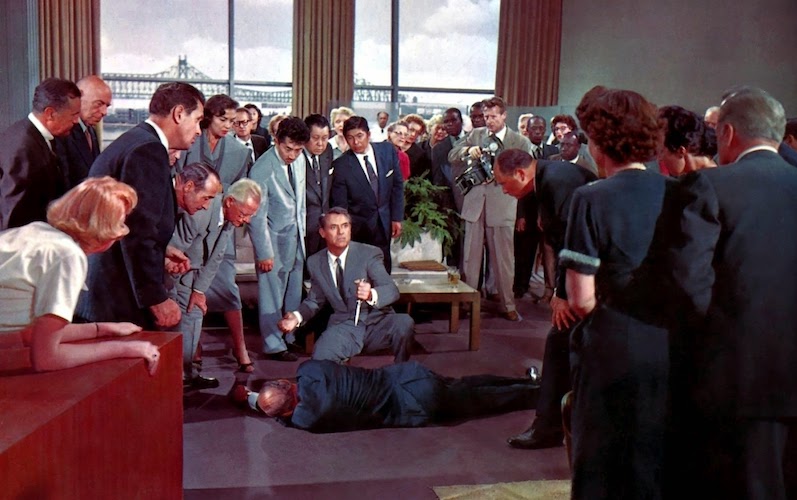 However, MGM felt that Cary was a bit old for Thornhill at 55. They were pushing for Gregory Peck, but Hitch felt he lacked the wit required for the role. Ditto William Holden. Given his box-office clout, the director usually got his way, and here was no exception. He did, however, have to wait till Stewart was committed to another project to cast the part.

Reportedly, once shooting began, Grant did not fully understand what was happening in the script, but Hitchcock saw his confusion as useful to his portrayal.  Meanwhile the star was convinced he was appearing in a very expensive flop.

Whatever concerns Grant may have had were soothed by the hefty payday he was receiving. Written into his contract was a provision that if the film went over schedule, the actor would be paid $5,000 for every extra day of shooting. Due to pre-production delays, he earned that extra fee from the very first day — this is addition to his straight salary of $450,000 and a percentage of the gross. Adjusted for inflation, Grant made millions on this film.

It was a challenging production. For two of his key scenes — the murder at the United Nations and the climax on Mount Everest, Hitch had to deal with lots of red tape and improvise to get what he wanted. Barred from shooting at the U.N., the scene of Thornhill entering the building was captured with a hidden camera, and the rest of the scene was shot on a set. 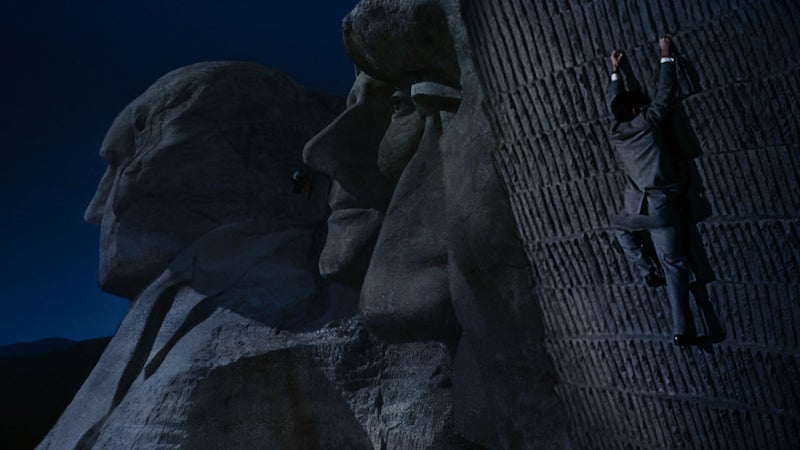 Hitchcock had hoped to film on Mount Rushmore, but safety concerns and a raft of prohibitive requirements from the Department of the Interior made it impossible. One fundamental problem: there could be no violence depicted on the visages of past presidents.

In the end, an intricate Rushmore set was built which, combined with skillful editing, made for a riveting climax. The joke ended up being on the government when many viewers assumed the scene had been shot on the real monument.

Beyond the film’s superb direction and script, Grant’s fellow players in front of the camera were perfectly cast, with Eva Marie Saint an ideal stand-in for Grace Kelly as icy blonde Eve Kendall, the sexy femme fatale who is not at all what she seems. In addition, the director had always admired the talent of fellow Brit James Mason, viewing him as an ideal villain. Mason’s suave but oily performance as master spy Phillip Van Damm proved him right.

Then of course, there is the young Martin Landau as Van Damm’s henchman, Leonard. Landau quietly resolved to play Leonard as a gay man in love with his boss. Both Hitchcock and Lehman knew this, and endorsed it. Seen today it’s fairly obvious, but to Landau’s credit, it was done subtly enough that the censors could not force cuts. (As a boy first seeing the film, of course I had no clue.)

I close with the aforementioned Bernard Herrmann, whose rousing score begins with the ominous sound of drums, launching Saul Bass’s indelible credit sequence. I submit this is among his best work for the Master, bookended by “Vertigo” and “Psycho.”

Speaking of closing, the film’s final shot of the train hurtling into a tunnel just after Thornhill and Eve go into their final clinch was the director’s idea. Originally, Lehman’s script had simply read: “The train heads off into the distance.” Hitch was extremely proud of this inspired finale, which over the years has left countless audiences amazed and amused — a naughty, seemingly private joke shared by millions.

“North by Northwest” was a smash with critics and public alike. It earned three Oscar nods, for editing, art direction, and (most deservedly) for Lehman’s script. Six decades later, it remains a Hitchcock peak, its luster undimmed.

While it captivated me first on television, then on home video, this is in the end a very big movie. And this weekend, I’ll finally get to see it on a very big screen.

The Stranger-than-Fiction Journey of Jennifer Jones